One of the major concerns for people is that once they buy a projector they want to make the most of it in terms of picture quality.

That’s where “Contrast Ratio” becomes an important thing to consider. In this guide you’ll learn all on what is a good contrast ratio for a projector.

You would probably want a nice video projection for a movie night with family, friends or a gaming fest and for that the calibration of your projector needs to be on point.

So with aforementioned statement we all require our projectors to deliver the best image quality it possibly can so that we can set it up indoor or outdoor.

Note : Apart from Contrast Ratios you should also go for optimal picture settings regarding projectors.

If you want to know more check our guide on the what are the best picture settings for projector.

To understand what is contrast ratio, we should keep in mind three important things :

All of these combined will give the best possible viewing experience but will directly depend on contrast ratio settings.

Note: Keep in mind is that even the best home theatre projectors in the market might not be able to deliver the desired image quality if they are not calibrated in a proper manner.

What is a Good Contrast Ratio for a Projector? Find Out 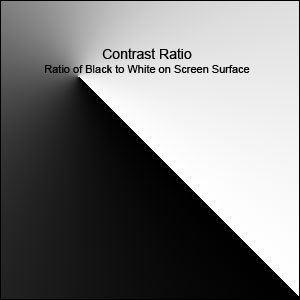 Contrast ratio is the name given to the reflection of light from an all-black and white image. In order to understand this concept in a much more simplified manner, what you need to understand is that as compared to the darkest blacks, the most intense white will manage to give a much sharper picture.

It further helps to bring to out all the faint colours as well as the tiny details which are found throughout the image.

The respective ratio for the contrast is given in a numerical form such as 1000:1, in this value the value 1000 is there to represent the white of the image while on the other hand 1 represents the black in the image.

Similarly, if the person is presented with 2000:1 as the respective contrast ratio, then this further points to the fact that the value 200 is there to represent the white in the image while one is there to present the black.

This question often times gets asked a lot that what exactly are the elements which influence the respective contrast ratio.

The most important element is the element of light, which influences the contrast ratio, on the most sever basis. The person can be able to determine the contrast ratio for the person so that he/she can thoroughly display their PowerPoint presentation at the desired place.

One important thing is that the natural light which beams through a simple open window would affect the quality of the picture, by disrupting it.

In order to determine which contrast ratio suits your situation best suits the respective environment that your projector will be chosen to be utilized in. You are required to pay very close attention to the respective set of the light source, which carries the ability to come into play during the time of usage.

In addition, there are specific ratio settings for each projector and it’s best if the projector manual is read carefully before calibration.

In order to begin, the person needs to turn off all the electrical lights and to cover all the windows in the room. This needs to be dome, and if not, it will affect the quality of the picture which is being delivered by the projector, no matter the type of style.

It is better advised to people to make use of such a room which is darker for the projector. It is considered to be much better if such a space is appropriated by the person for a projector that is painted in dark colours.

On the elimination of all the light sources, the room which is being used is further filled with complete darkness.

Although all the above-stated methods are rather simple, these will play a key role in the minimization of any additional sources that cause a disturbance, which will further affect the quality of the picture being produced.